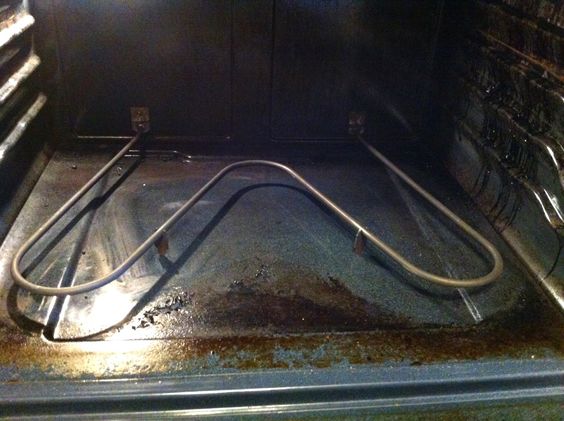 I almost didn’t want to write this post because it’s not very pretty to look at. (It’s been a while since I cleaned my oven.) But then I thought many of us have electric ovens and sometimes things break and they aren’t very pretty to the eye. Let’s face it life is messy and it’s not always cute pumpkins and pretty decor. So I want to share with you how I fixed my oven for free.

A week or so ago, I noticed my baking element wasn’t heating up. I figured it was time to replace it. I ordered a new one on eBay for around $17. When the part arrived, I killed the power, pulled out the range  and opened  the back of the oven. Removed a few screws that were holding it together. Next I took out the baking element. Once again,  two screws needed to come out. That’s all.

When I pulled out the element I noticed that one of the wires wasn’t connected to it. This wire was fine, but the second wire had a burned tip and wire connector piece or terminal. (I think that’s the proper term.) I had a hunch that the baking element was just fine and that the culprit was the burned wire.

I took the burned piece to an appliance store where the nice man gave me a couple of new pieces to take home (free of charge). Or you can order them on Amazon.

From what Sears told me when I called them about replacement parts, they charge at least $200 for a  repair guy to come out. This does not include parts.